Posted on November 17, 2022 by smoothjazzandmore

The Grand Prix series heads to the other side of the globe and the country of Japan for the NHK Trophy.  Slots for the Grand Prix Final have been clinched, and more will be determined this weekend.

Men: Japan’s Shoma Uno took home the gold at Skate Canada and looks to clinch a spot in the Grand Prix Final this weekend. It will be a tough competition as Grand Prix de France Champion Adam Siao Him Fa of France also looks to clinch his place in Torino. Japan’s Sota Yamamoto took home silver in Angers and can sneak in to a spot. South Korea’s Cha Juhnwan won bronze at Skate America and will look to grab a spot on the podium. Italy’s Matteo Rizzo found the podium at Skate Canada, finishing with bronze medalist and has an outside chance at representing his home country in his home tournament next month. 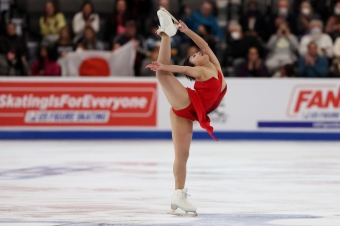 Women: Japan has a strong team of women skating this weekend led by Olympic bronze medalist, Kaori Sakamoto. She won convincingly at Skate America in October and could clinch her spot in the Grand Prix Final next month. Her teammate Rinka Watanabe pulled off a huge upset, defeating Sakamoto at Lombardia Trophy this summer. Both are favored to medal this weekend. Rion Sumiyoshi took home bronze in Angers earlier this month, giving the country a chance to sweep the medals. South Korea’s Kim Yelim took silver in France, and could break up the podium sweep with a convincing performance.

Skaters to Watch: Look out for American Starr Andrews. Her break out performance for silver at Skate Canada was no fluke, and could reach the podium with another outstanding skate this weekend. Teammate Amber Glenn is another skater looming under the radar. She found the podium at Skate America, taking bronze.

Pairs: Only six teams will be competing this weekend. At the top of the list are the home favorites, Riku Miura and Ryuichi Kihara. They took home gold at Skate Canada, and a win this weekend could become the first Japanese pairs team to make the Grand Prix Final. Americans Emily Chan and Spencer Akira Howe pose the biggest threat. The team won silver at Skate Canada last month. France’s Camille and Pavel Kovalev took home silver at Grand Prix de France two weeks ago, while Germany’s Annika Hocke and Robert Kunkel placed third. 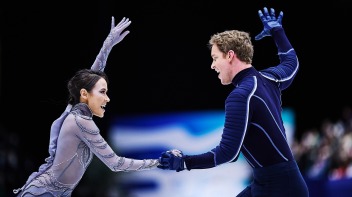 Ice Dance: 10 teams square off this weekend, with Americans Madison Chock and Evan Bates the odd-on favorites to book their ticket to Torino for the Final. Competition should come from Canadians Laurence Fournier Beaudry and Nikolaj Soerensen, who were silver medalists at the Grand Prix de France. France’s Evgeniia Lopareva and Geoffrey Brissaud took bronze at the same event. Japan has two teams entered into the competition, with 2022 Four Continents silver medalists Kana Muramoto and Daisuke Takahashi the country’s best chance to medal.

Teams to Watch: Americans Caroline Green and Michael Parsons had a 4th place finish at Skate Canada and look to land on the podium for the first time. China’s Shiyue Wang and Xinyu Liu marks the country’s first entry on the Grand Prix circuit this season.