Posted on January 13, 2021 by smoothjazzandmore

The 100th anniversary of US Figure Skating will be one for the record books.  Last year’s Skate America in Las Vegas was the first of its kind, a competition performed in a “bubble” to prevent the spread of COVID-19. Protocols will be the same this week, as the US Figure Skating Championships takes place in the same arena. Because of the pandemic, regional competitions took place for junior and senior skaters. And for the first time, skaters had to compete virtually, submitting their programs by video. Unfortunately, the competition had its share of problems, as four teams and one ladies skater were forced to withdraw because of possible COVID-19 exposure. Despite the loss, the competition will continue this Thursday, with the Pairs short and Ladies short programs.

Men: With no known positive tests confirmed, the field looks to be set. Nathan Chen dominated the men’s event at Skate America last year, and is, by far, the odds -on favorite to win his 5th straight US title. A number of skaters look to block his path, including 2015 US Champ, Jason Brown. Brown caught a bad break when Skate Canada was cancelled last year due to COVID-19. He trains in Toronto with coaches Tracy Wilson, Brian Orser, and Karen Preston. Despite the lost competition time, he’s still a major player this weekend. Vincent Zhou took a step back during last year’s US Nationals finishing 4th. But he had a solid program at Skate America last year, taking silver. Tomoki Hiwitashi was the surprise podium taker at US Nationals, finishing 3rd. He took 4th at Skate America and looks to make the podium again.

Skaters to watch: Camden Pulkinen is one skater you should keep your eyes on. He’s had some success in juniors, but is still looking to transfer that to the senior circuit. He was 7th at last year’s nationals and finished 9th at Skate America. Ryan Dunk is also a former US junior champion in 2019. He was 11th in men’s seniors in 2020. 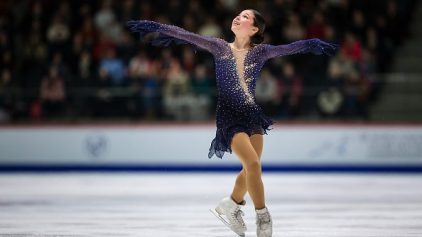 Ladies: Alysa Liu is supposed to be the favorite, but there are three factors that may get in the way of the two-time US Ladies champ from making it a three-peat. First, the lack of competition, as she opted out of this season’s Grand Prix. Second, a growth spurt, as she’s grown three inches since last year. And third, the large field of ladies skating, led by Mariah Bell. She had the free skate of her life at last year’s Nationals, finishing 2nd and is coming off her first Grand Prix title at Skate America. 2018 US ladies champ, Bradie Tennell still has the fire to get her title back and has been a consistent skater this season, finishing 2nd at Skate America. Amber Glenn is also a top contender, having finished in 5th place at Skate America last fall.

Skaters to Watch: Senior skater Paige Rynberg was a last minute withdraw because of COVID-19 exposure. A bad break, as she won the virtual qualifying event. This leaves 17 skaters in the field this weekend. Keep your eye on Audrey Shin. She made her senior debut a memorable one, as she found the podium at Skate America, finishing 3rd. This will be her first competition as a senior and she could make a splash in Vegas. Karen Chen will also be a factor.  Of course, the story to root for is former two-time US champ and Olympian, Gracie Gold. She’s fought hard to get back to Nationals two years in a row after a difficult period. 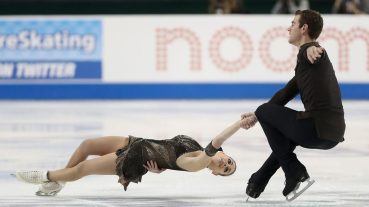 Pairs: This category was hit hard by the pandemic. Sarah Burden and Matthew Rounis, Winter Deardorff and Mikhail Johnson, and Brynne McIsaac and Mark Sadusky were all forced to withdraw because of COVID-19 exposure. The loss drops the field to 9 teams, with the team of Alexa Knierim and Brandon Frazier being the slight favorite in the event. The newly formed pairs duo surprised audiences by winning their first ever competition together at Skate America. Jessica Calalang and Brian Johnson were caught a bit of guard, but were able to take 2nd. 2019 US pairs champs Ashley Cain-Gribble and Timothy Leduc will look to get back that spark after a poor showing in Las Vegas, as they finished 4th.

Team to watch: Audrey Lu and Misha Mitrofanov had their best Grand Prix competition showing, finishing 3rd at Skate America. They finished 6th at last year’s nationals and look to improve their showing. 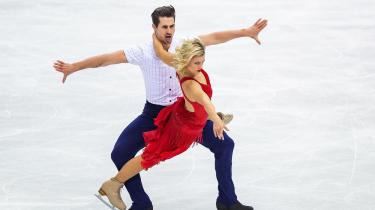 Ice Dance: Two teams clearly are at the top of the list. Madison Chock and Evan Bates come into the competition as the defending champions. But they decided to opt-out of the Grand Prix series due to the pandemic. Still, they’re the slight favorites to win back-to-back titles. Madison Hubbell and Zachary Donohue didn’t opt-out, and won Skate America with a strong performance. They look for their 3rd US title this weekend. Kaitlyn Hawayek and Jean-Luc Baker also participated at Skate America and went home with a 2nd place finish. They look to improve on their 3rd place showing at last year’s nationals.

Team to watch: Skate America medalists Christina Carreira and Anthony Ponomarenko were forced to withdraw from the competition because of COVID-19 exposure. They were expected to contend for a medal this weekend. Their absence leaves an opening for the remaining eight teams. Keep your eyes on Caroline Green and Michael Parsons. The team missed the podium at Skate America, finishing in 4th and were 5th at last year’s nationals.

The US Junior Championships take place January 20-21. Here are our picks to win. 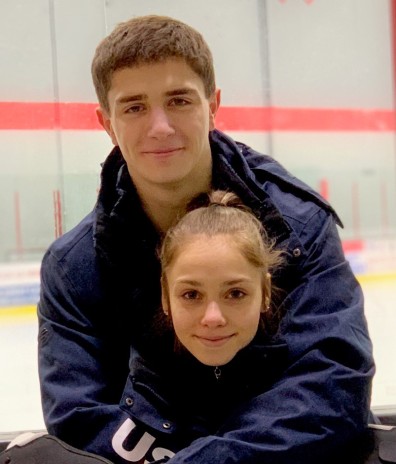